Aerospace manufacturing has certainly evolved since the Wright brother’s famous first flight in December 1903 and all that has transpired in the aircraft and aerospace industry as a whole. 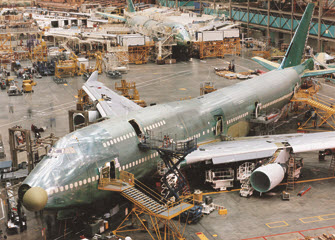 In 1908 the Wrights secured a contract to make a single aircraft from the U.S. Army, and also licensed their patents to allow the Astra Company to manufacture aircraft in France. Glenn Curtiss of New York began selling his own aircraft in 1909, prompting many American aircraft hobbyists to turn entrepreneurial. Fast forward through Aerospace manufacturing WWI and WWII…

The aerospace industry ranks among the world’s largest manufacturing industries in terms of people employed and value of output. Yet even beyond its shear size, the aerospace industry was one of the defining industries of the twentieth century. As a socio-political phenomenon, aerospace has inflamed the imaginations of youth around the world, inspired new schools of industrial design, decisively bolstered both the self-image and power of the nation state, and shrunk the effective size of the globe. As an economic phenomenon, aerospace has consumed the major amount of research and development funds across many fields, subsidized innovation in a vast array of component technologies, evoked new forms of production, spurred construction of enormous manufacturing complexes, inspired technology-sensitive managerial techniques, supported dependent regional economies, and justified the deeper incursion of national governments into their economies. No other industry has so persistently and intimately interacted with the bureaucratic apparatus of the nation state.

Aerospace technology permeates many other industries — travel and tourism, logistics, telecommunications, electronics and computing, advanced materials, civil construction, capital goods manufacture, and defense supply. Here, the aerospace industry is defined by those firms that design and build vehicles that fly through our atmosphere and outer space.

Source: The History of the Aerospace Industry

We are available 24-hrs a day, 365 days a year so never hesitate to contact us for any air compressor, air tool or material handling need.

Please fill out the form below to download the brochure.